DUBLIN will be back on orange alert for Storm Barra for the early hours of this morning – and schools will CLOSE again in the capital.

Some 38,000 remain without power with “many more hours to go” after gusts of over 160kph lashed Ireland.

Dublin, where an earlier Status Orange warning was eased after Barra’s roar, will be back on orange alert from 1am to 7am on Wednesday.

The Department of Education confirmed Dublin schools should also now close tomorrow – as all schools in other red and orange alert counties are to remain shut.

“Heavy rain will also bring risks of surface flooding and, due to a combination of high waves, storm surge and high tide, coastal flooding is expected. Disruption to power and travel are likely.”

CAPITAL BACK ON WATCH

Met Eireann meteorologist Gerry Murphy said: “It has been decided in the last few minutes that we will up our warning level for the Dublin region from 1am to 7am to an orange level warning.

“So, overnight, the winds in Dublin will actually be stronger than they were this morning. They’ll be from a different direction, they won’t be coming from the sea, there won’t be a risk of flooding.”

And Murphy warned there are “many more hours to go” until Storm Barra finally clears. 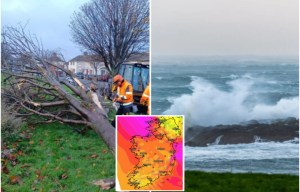 Clare is the only county where the threat level remains at red, due to expire at 1am.

Cork and Kerry are back to orange level, along with Limerick, Waterford, Galway, Mayo, Wexford until 6am on Wednesday.

Leitrim and Sligo are also on orange alert until 8am on Wednesday, for 130kph gusts with localised strong winds.

And Donegal will feel the final roar of Barra tomorrow, as an orange alert there kicks in from 2am to 2pm.

Forecasters said: “Northwesterly winds will reach mean speeds of 65kph to 80kph with severe or damaging gusts of 100kph to 130kph, with localised stronger winds likely.

“Due to a combination of high waves, storm surge and high tide, coastal flooding is expected. Disruption to power and travel are likely.”

A nationwide yellow alert will be valid until 6pm on Wednesday as Barra starts to ease off, with Met Eireann still warning of possible 110kph gusts and surface flooding as it starts to blow over.

The Department of Children said: “Further to the update issued to the sector this evening, Dublin has now been upgraded to Status Orange.

Emergency ESB crews kicked into gear following a flurry of outages and, thanks to their tireless efforts, the figure was reduced to around 38,000 by Tuesday night.

ESB spokesperson Brian Tapley said power would be restored as soon as possible, but that crews could only be deployed when it was safe to do so.

The areas worst affected by power outages are Killybegs, Arklow, Enniscorthy, Killarney, Tralee, and parts of Cork, while upwards of 1,700 homes in Cavan also suffered disruption.

Flights to and from Dublin and Cork Airports were cancelled as winds of 150kph pounded the country. Cork, Kerry and Clare bore the brunt of the bad weather.

A gust of 159kph was recorded at Fastnet Lighthouse off the south coast, with flurries of 134kph and 130kph recorded in Sherkin Island, Cork, and Valentia, Kerry, respectively.

Some 28 businesses in Bantry, Co Cork, were destroyed by flooding as torrential rain fell across the country.

Pumps and sand bags were desperately deployed in a bid to prevent flood damage as the River Lee in Cork burst it banks spilling onto the city centre quays, while Tralee also encountered minor flooding in the morning.

Minister for Public Works and Flood Relief, Patrick O’Donovan, said: “The worst affected area at the moment is Bantry, there has been flooding in Cork and Kerry and some trees down in Limerick.

“There’s a lot of power outages in Donegal, there is concern in the North that the wind will turn as the worst impact is expected there in the afternoon.

“High tide is expected in the east, the storm is by no means over so people should continue to heed advice by the local authorities.”

He said the “tail end of the storm can give you a wallop”.

Housing Minister Darragh O’Brien has warned those in red and orange areas to remain indoors.

He said: “This isn’t over, I would ask people to remain vigilant.

“The main thing is public safety and in the red areas, stay in essentially.

“The response has been absolutely magnificent, our emergency crews have been preparing for this since last Thursday, Friday.

“But it really is very important that people this storm event, Storm Barra, is not over yet.”

Keith Leonard, head of Ireland’s National Directorate for Fire Emergency Management and the National Emergency Coordination Group said the Army will be called on to help with the clean-up and recovery from the storm.

He said: “They remain on standby to assist local authorities.

“Probably they will be required for extensive recovery operations which will happen tomorrow, particularly to clear trees and debris from the storm.”

The emergency team leader also warned that it may take several days for the ESB to restore power to all homes that were cut off ­during the storm.

He said: “They’re doing their level best. I think they are even working where conditions permit to start the restoration process today.

“But it is a dynamic situation and it’s unclear yet exactly when everybody will be restored. Sometimes it takes a few days, particularly in rural areas.”

A spokesperson for the Defence Forces said: “Defence Forces personnel have been making preparations to ensure they can contribute with available capabilities and are liaising closely with the Authorities and Emergency Services at a local level.”

The wet weather has also put 40 water plants across Ireland at risk — which could have a knock-on effect on over 76,000 people.

Irish Water said it was “continuing to monitor the impact of Storm Barra on water supplies around the country and working with Local Authorities to restore water supplies impacted by the severe weather”.

The utilities firm added: “To date the most severe impact is in the South-West and South-East, particularly in counties Cork and Kerry while also now impacting Wexford, Waterford and Donegal.

“Some supplies are without water and a number of precautionary Boil Water Notices have been issued.”

The precautionary boil water notices were for Aughacasla and Carragh Lake in Kerry, Cork’s Newmarket area, Glenties in Donegal, and Wexford’s Enniscorthy region.

Fallen trees and flying trampolines caused havoc on Irish roads throughout the day as a slew of dangerous incidents were reported across the country.

In Kilkenny, a trampoline caught in power lines on the Castlecomer Road, while in neighbouring Tipperary, local councillor Imelda Goldsboro alerted people to a loose trampoline on a road in Moyglass.

In Cavan, the county council said “a number of fallen trees on the roads” caused issues, but had been cleared by fire services.

A potential dangerous incident was also avoided in Derry when strong gusts ripped down scaffolding onto a parked car.

An articulated truck was left overturned on the M8 near the bridge in Fermoy, Cork, due to a powerful blast of wind.