THE proud relatives of golden boys Paul O’Donovan and Fintan McCarthy have pledged: “We’ll give them the homecoming they deserve.”

Rowing sensations O’Donovan, 27, and McCarthy, 24, made history by winning Ireland’s first Olympic gold since 2012 after a thrilling lightweight double sculls victory at the Tokyo games.

The dynamic duo edged out Germany as they powered to victory in the final at the Sea Forest Waterway – with their triumph meaning they follow in the footsteps of Katie Taylor who landed gold for Ireland at London 2012.

The Irish Sun understands heroes O’Donovan and McCarthy are due to return to Ireland from Japan on Sunday.

Covid-19 restrictions in Tokyo mean their delirious families weren’t able to be with the two athletes at the Olympics to celebrate the epic victory.

But overjoyed relatives revealed they were determined to mark their amazing achievement when the two rowers get back to Skibbereen, Co Cork.

Fintan’s mum Sue said: “We’re absolutely over the moon – we’re delighted for the pair of them.

“I can’t wait for them to come home now – I’m really looking forward to it.

“We’ll do whatever we can to make their homecoming one that they deserve.”

More than 10,000 fans famously packed the west Cork town of Skibbereen to welcome O’Donovan and his brother Gary home after they won Ireland’s first ever Olympic rowing medal at the Rio de Janeiro games in 2016.

But the revelry when the gold medal champs get back this weekend will have to be scaled back in line with the current Covid-19 regulations.

Despite the constraints amid the pandemic, Sue told how plans were being made for “a safety-conscious” homecoming party for Fintan and Paul in Skibb.

She said: “We’re gonna try our ultimate best to do something for a homecoming.

“Obviously we have to stick to safety regulations but we’re gonna try and do whatever we can to make the homecoming one that they deserve.”

Skibbereen Rowing Club president Nuala Lupton admitted the homecoming for the golden pair would be “different” than the huge celebrations enjoyed by the O’Donovan brothers in 2016.

She said: “It will be different. People will stand on the roadside perhaps and wave flags. There will surely be some sort of a homecoming. And of course, we will welcome them back here at the club.”

McCarthy’s sister Caitlin said: “It feels like a dream. I think it shows the least likely person can do it if they put their mind to it. He used to run away from a ball if it was thrown at him as a kid.”

Fintan’s twin brother Jake, who is also a talented rower, told how they are hoping that Fintan’s success will inspire other young people to take up the sport.

He said: “When Gary and Paul got the medal in Rio the numbers that started rowing in Skibb hugely increased. Hopefully now this will be the same and people will get involved in rowing.”

Speaking from the family home outside Skibbereen, mother Sue revealed how Fintan had reported that his phone was “broken” from all the messages of congratulations.

Sue confessed she was “gutted” not to have been in Tokyo.
However, she is hopeful that Fintan and Paul will be back in Ireland on Sunday and is looking forward to “some sort of celebration”.

She said: “Everyone will do what they can. Obviously at the moment restrictions prevent us from doing anything huge but we will see what we can do and do the best we can.”

A joyous Trish was trying to gulp back a bowl of yoghurt at her Lisheen home prior to media interviews following a hectic night of fever pitch excitement in which she didn’t have time for sleep or food.

Recalling her emotions as Paul and fellow Skibb man Fintan crossed the finishing line in Tokyo the middle of the night Irish time, Trish said she was ecstatic.

She continued: “I thought fair play to them. Paul was just not going to stop unless like the poor Norwegians, something happened, like they capsized the boat.

“You don’t know until they cross the line. It is never a given. You can’t be sure. They (Paul and Gary) were always golden boys. The day they were born I knew he (Paul) was special. The two of them. (Paul and Gary).”

Asked what her first message to Paul will be when they are reunited, Trish said she will say “Fair play you divil.”

She added: “I will probably cry my eyes out when I see them. Where would you get it? (An Olympic win) out in the wilds of West Cork.”

And ahead of the homecoming, Sean O’Brien, Skibbereen Rowing Club captain, branded it “a special club”.

He said: “Skibbereen Rowing Club has more rowing medals than (the Rowers) in Team GB. It’s astonishing. It is like a dream.”

The RTE man said: “What about that! Fintan McCarthy and Paul O’Donovan! Olympic Gold. I’m so privileged to be involved with the athletes.

“After all the years, that’s my first time calling Irish Olympic Gold.”

Fans flooded the 71-year-old’s Twitter account, saying they were “delighted” to see him finally be associated with Irish Olympic gold. 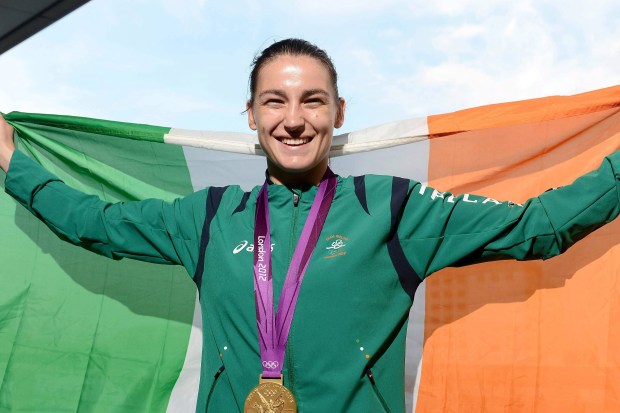 ROWING champs Paul O’Donovan and Fintan McCarthy brought Ireland’s haul of gold medals at the Olympic Games up to ten. Here we look at those who have delivered on the grandest stage of all since the nation entered the Games in 1924.

The former swimmer scooped three gold medals and one bronze in Atlanta amid accusations of doping which she has repeatedly denied.

Smith de Bruin was handed a four year ban for tampering with her urine sample but was allowed to keep her Olympic medals as she never tested positive for a banned substance.

Smith de Bruin was not mentioned by RTE presenter Jacqui Hurley and pundit David Gillick as they discussed previous Irish Olympic champions after the rowers struck gold in the men’s double sculls in Tokyo.

Following the snub, the ex-swimmer today congratulated O’Donovan and McCarthy while bigging up her 1996 victories.

Smith de Bruin – who has retrained as a barrister – said: “I just want to congratulate our brilliant rowers, Fintan McCarthy and Paul O’Donovan, on their wonderful achievement in becoming Ireland’s newest Olympic champions. What a stunning performance.

“Twenty five years ago this week I became the first Irish woman to win an Olympic gold medal. By the end of that week in Atlanta I had become a triple Olympic champion.

“It was the culmination of 17 years training and dedication to my sport.

“Standing on the podium, watching the tricolour being raised and listening to Amhran Na Bhfiann was and still is the proudest moment of my life.

“Twenty five years have passed and people still stop to tell me where they were when I won my medals.

“I will always be incredibly proud of what I achieved in Atlanta and remain touched by the level of support still shown to me by the people of Ireland.
“Michelle Smith de Bruin, triple Olympic champion 1996.”

Mum who lost family in Kanurk murder-double suicide ‘died before her time’ but with dignity and courage, funeral told